Jordan is an Arab Muslim nation located on the east bank of Jordan River. Our journey began from its capital city, Amman. Located on seven hills, Amman is a beautiful and peaceful city with good infrastructure and friendly people. We spent one day exploring the capital, from the historic Amman Citadel, the Roman Temple of Hercules, the Roman Amphitheatre (still in a good condition), the downtown area to the King Abdullah I Mosque, Amman offers a lot to see and explore. The good thing about these places is they are not located far from each other. Downtown market of Amman is a good place to shop their local cultural goods where ‘Bargain is a MUST’. Shopping malls are expensive, seriously no kidding, unless you get some good deal/sale. 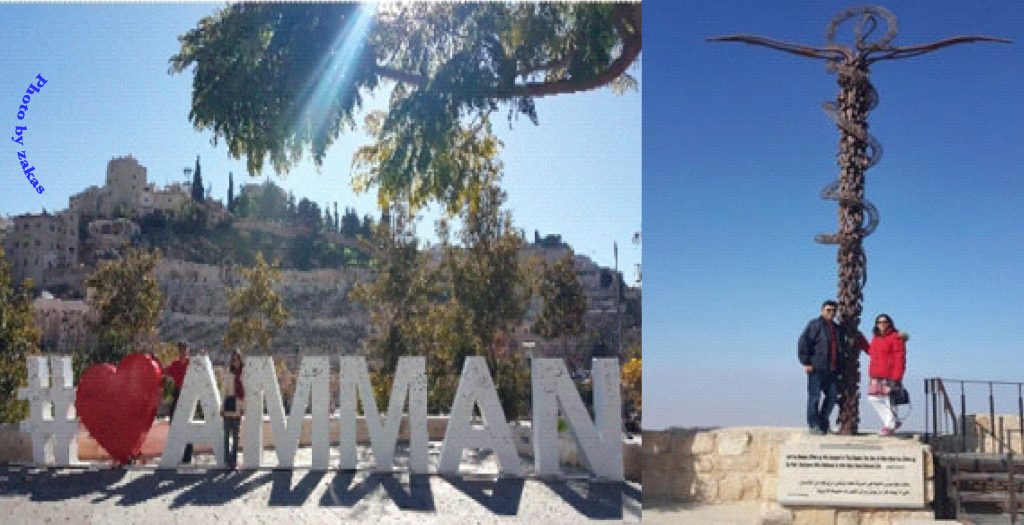 Petra…. this word and this place have amazed me since my childhood days. I still remember the book “Wonders of the world and their secrets”, since my early teenage days; don’t remember how many times I read it. ‘Petra’ was one of the chapters in that book. I used to wonder how it was built, who used to live there and will I ever be able to see this amazing wonder of the world.I was over the moon when in August  my husband told me that he’s planning a trip to Jordan in December holidays. It was a feeling of joy and excitement that finally I will get to see one of my desired places. So our hunt for good deals regarding air tickets, hotels, tour guides etc. began. Our Jordan trip consisted of seven days. Seven days of exploring history of Amman, Umm Qays, Jerash, Mount Nebo, Petra, Wadi Rum and Dead Sea. 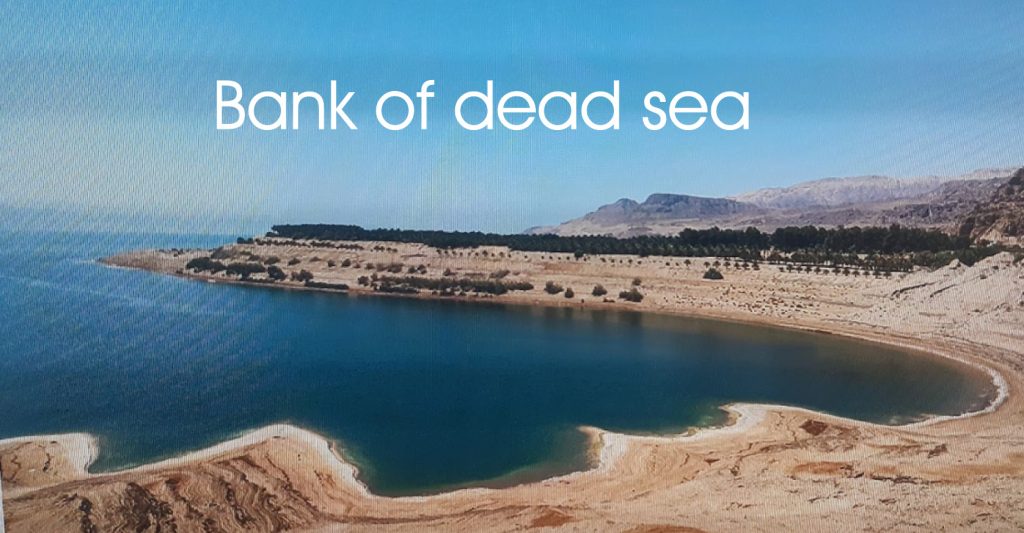 Our second day was spent exploring Umm Qays and Jerash ruins. Both these places are located few hours’ drive from Amman.Umm Qais or Umm Qays is a site just off the Syrian border in North Jordan and of the ancient Greco-Roman city of Gadara. The city is mentioned in the New Testament as the site where Jesus cast out demons and sent them into pigs, who then ran into the sea (Matthew 8:23-34). Umm Qays boasts impressive remains of colonnaded street, a theatre, a mausoleum and a Byzantine church. One can also sweep views over the north Jordan valley, Syria, Israel held Golan Heights and the sea of Galilee.

In ancient times, Jerash was known by ‘Gerasa’. Truly admiring ‘Jerash’, stands out among the crowd. A great place to wonder and wander, Jerash is also described as “Pompeii of the East”, as a series of earthquakes buried it for a thousand years under the sand. The ruins are extensive and you can see a huge city was There once.Jerash reveals paved and colonnaded streets, soaring hill top temples, theatres, spacious public squares and plazas, baths, fountains and city walls pierced by tower and There’s a very colourful market just outside the city ruins with a variety of cultural items and souvenirs. If you are interested in buying, it’s THE place to buy as this market offers the best price as compared to the rest of Jordan.After exploring Amman and the nearby places, we headed towards Petra by road. On our way, we stopped at Mount Nebo.Mount Nebo sits 10 kilometres North West from Madaba. It is the mountain considered to be where Moses saw the Promised Land before he died. On a clear day, you can spot the historic cities of Jericho and even Jerusalem from Mt. Nebo.

“One of the wonders of the world”

‘A Rose-Red city—half as old as time’.

We reached the town by sunset, and I couldn’t wait for the morning when I will be in front of the wonder, admiring it. So with the sunrise, we became Indiana Jones (hahaha) and headed towards the magnificent ruins of Petra. It’s a good walk of about 30 minutes through Al Siq canyon which leads you to Petra’s most elaborate ruin “Al Khazneh” (The Treasury). 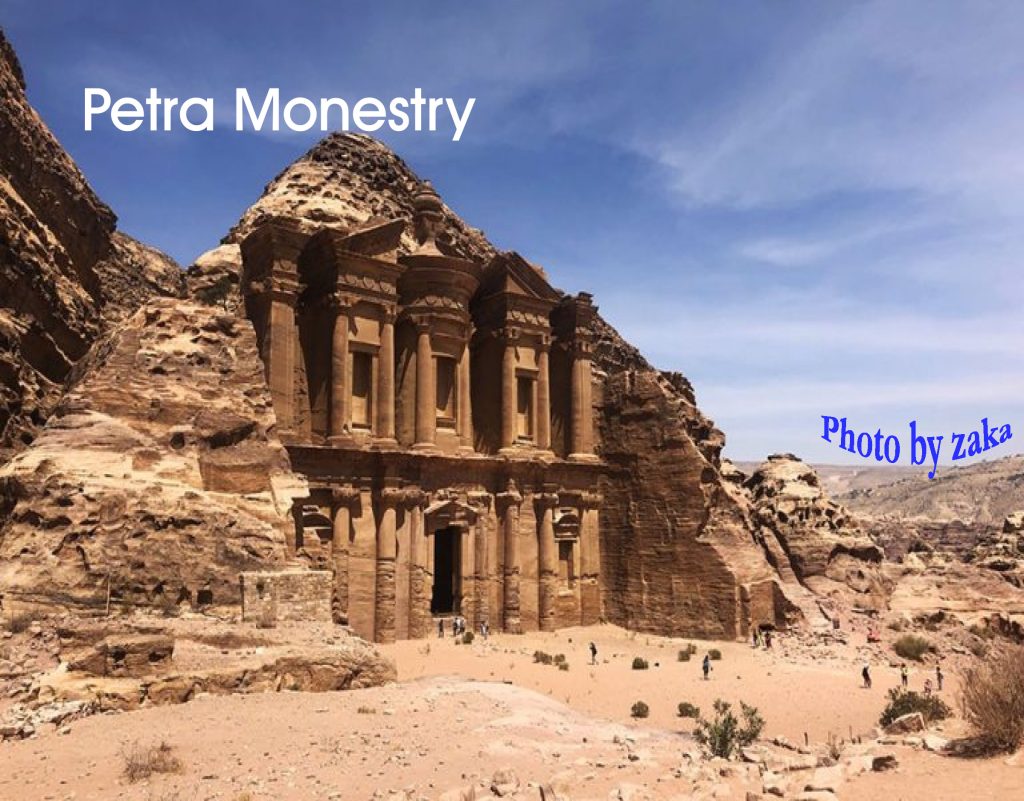 I will not go into the historical details; we all know and can Google it of course.
Standing in front of ‘Al Khazneh’ was like a dream come true for me. Ah! Petra! Here I am finally, awestruck and totally mesmerized by its beauty that how skilfully the structures here were carved out of sandstone cliffs. Petra contains tombs, temples and an Amphitheatre carved into pink.sandstone cliffs. Another magnificent, iconic monument of Petra is ‘The Monastery’, also known as ‘Ad-Deir’. It’s really a tiresome walk through the cascading, steep path on the cliffs to reach ‘The Monastery’. By its name it’s clearly understandable that it was used for religious purposes. I really felt like Indiana Jones standing in front of ‘The Monastery’, with a false hope of finding some treasure. You can also find some ancient Roman ruins inside Petra. It takes a full day to explore Petra, so one should start the day early.Just a few minutes’ drive from Petra, there is ‘Little Petra’ as well. The ruins are not that extensive like Petra, but not a bad option to stop for 10 to 15 minutes to have a look at them.

‘The Valley of the Moon’.

Wadi Rum is a vast wilderness, timeless place where the weather and winds have carved the sandstone and granite rocks with magical exquisitism. Wadi Rum is best known for its connections with the British officer T.E. Lawrence who passed through it during the Arab Freedom Movement of 1917-18. Some famous films have also been shot here, like, Transformers 2, the last days on Mars, The Martian.

Our last stop was at Dead sea resort. Visiting and taking a dip in Dead Sea is a must when in Jordan. Bordering Israel, the West Bank and Jordan, it’s the lowest point on Earth. Its hyper saline water makes floating easy. Since it was very cold, I couldn’t make myself go and enjoy a dip in Dead Sea, but somehow out of sheer excitement, my husband managed to take a dip in the salty waters with the Dead Sea’s healing mud all over his body. 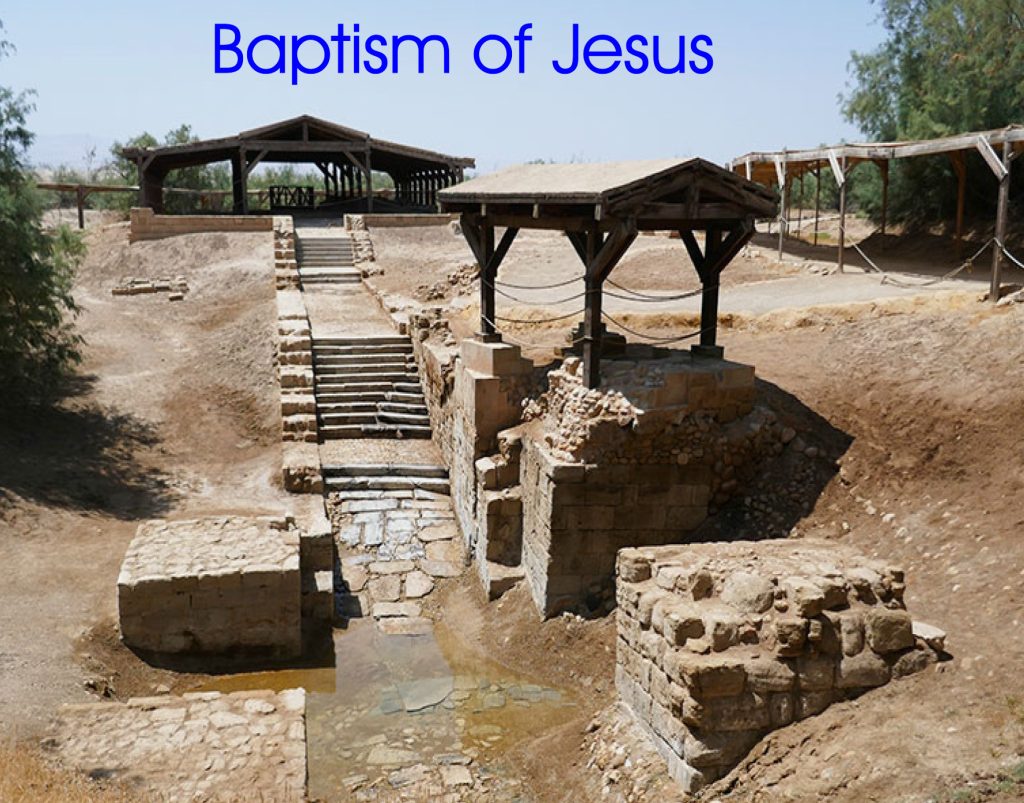 As per locals: When Qaum Loot were destroyed by Almighty Allah and their city made upside down (at now under Dead sea), Hazrat Loot was told by Almighty that he or his accomplishes must not look back to what’s happening behind to unbelievers/their disobedient Qaum. The Loot’s wife, however, in defiance to Almighty’s command looked back and was turned into a statue, which is even intact today on top of the mountain on the shores of Dead sea.So our seven day trip to Jordan came to an end with beautiful memories of the friendly Jordanian people and the marvellous way they have preserved the history. 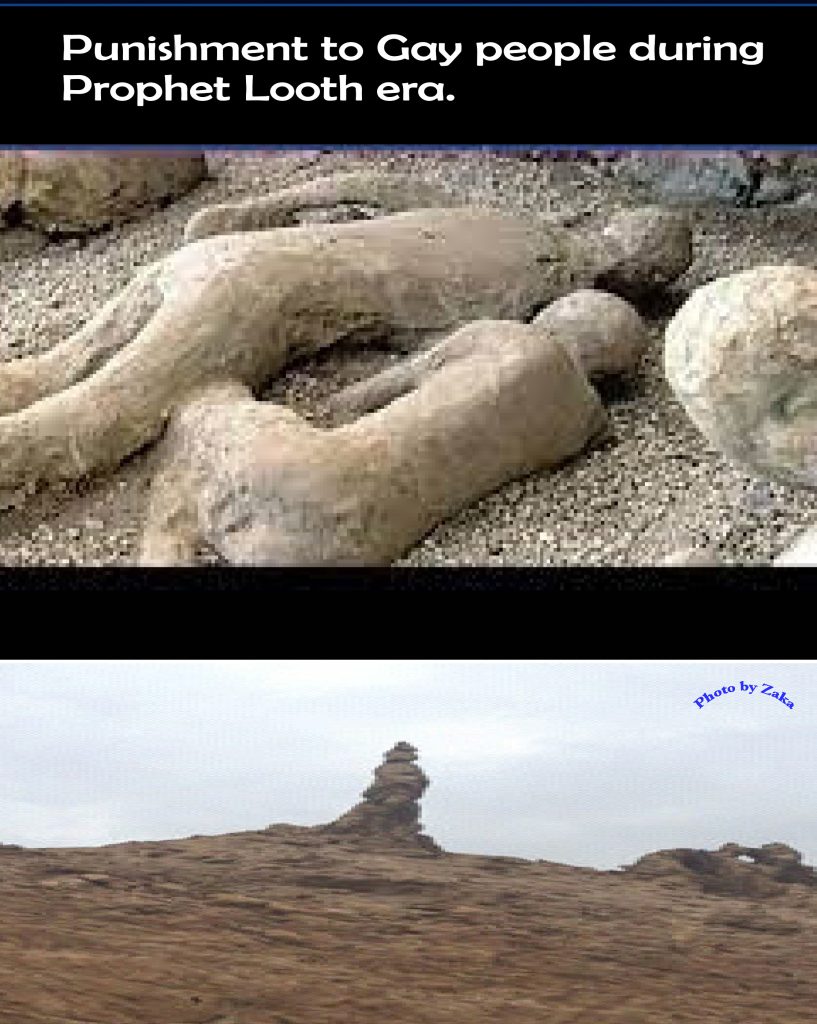 *Winters in Jordan are really cold, yes, I mean it. Try to visit during Autumn or Spring time.*Don’t forget to buy Dead sea minerals/mud packs. It’s a good gift for family and friends.
*Explore Petra at daytime; don’t waste money on buying tickets for ‘Petra by night’ show. Trust me, it’s not worth it.
*At Wadi Rum you can enjoy four wheeler drive and can also book your stay at the luxury camps. 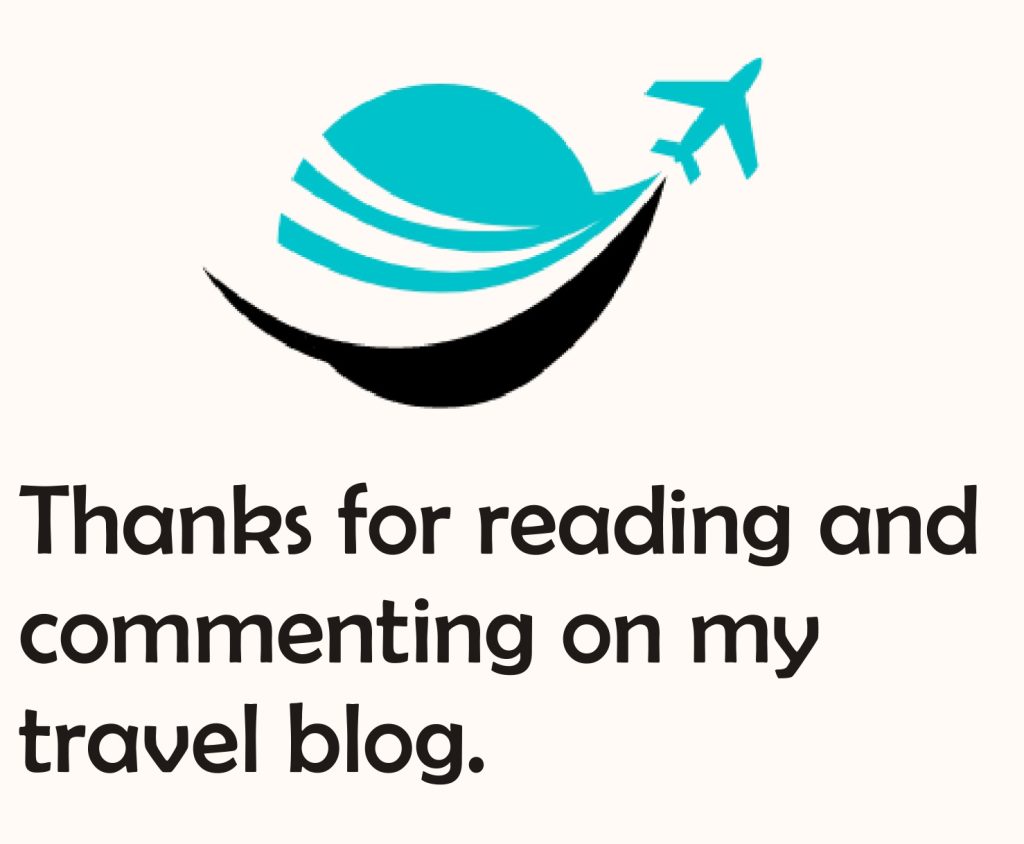